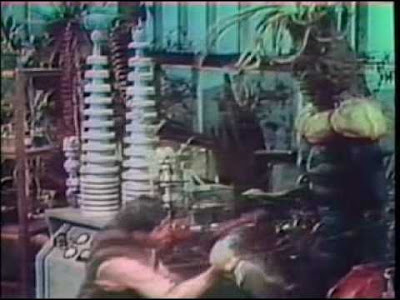 This review has been sliding through the Unseen to be posted pile for literally years until it perfectly lined up with Christmas.
This may or may not have been written by Ed Wood Jr. I say that because some sources over the years have said that isn't the case while others have said it is. The Alpha Video release, under the title REVENGE OF THE VENUS FLY TRAP in newly minted opening credits specifically states something that has never been specifically stated anywhere that I've ever seen. Personally I don't know if this is Wood's work, owing to the fact that this is just so damn loopy that I'm not sure he would have come up with it.

The plot has a military scientist taking time off as he nears a mental break down. For whatever reason he decides to crossbreed a man and a venus fly trap with the resulting monster being just one of the weirder things ever out there.

It wasn't until relatively recently that I actually found a copy of this film. Long rumored but not really seen this was a film I found I was trying to track down because it just sounded so damn wacky. When it finally turned up, in a multifilm DVD pack I wasn't disappointed. This is pure insanity that demands to be seen and made fun of (RiffTrax has done just that).

Full of weird dialog, all over the place performances and a what were they thinking monster. RETURN OF  DR X is just a bad movie lovers dream. One of the truly great so bad it's good films this film is funny for all the wrong reasons. Its a film where you wonder how it was that adults had anything to do with this. It is a film I put on when i need to remind myself of the stupid things people who should know better do occasionally.

An absolute must for bad film lovers. For everyone else get your friends and get ready to pick on a classic.
Posted by Steve Kopian at December 25, 2022