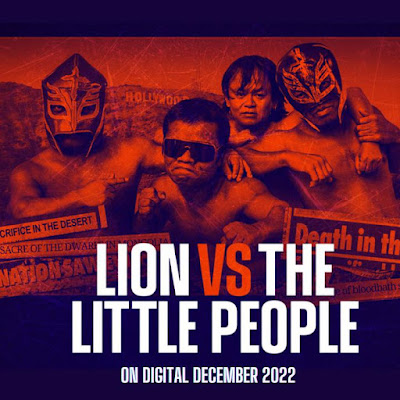 Being promoted by having a single screening  with a limited number of seat so it's the smallest release in UK history, LION VS LITTLE PEOPLE is a film I will be wrestling with for a long time. This is a brilliant faux documentary that says a great deal about a lot of things but has an intentional uneven tone that kind of undercuts the serious points it's making.

The film is a recounting of an "Internet Myth" about an alleged fight between a lion and 40 little people. Before we get to the fight and its aftermath we follow the story of the documentarian takes as he unravels the story which follows a super rich mogul who parleys a media empire into a sports betting super fortune and real life gladiatorial fights.

Bookended by statements about the way Little People are portrayed in the media, the film is at times a solid look at what people of a smaller stature have to endure, especially if they are actors. You completely understand how the actors could have ended up in a situation like this. This film is a brilliant look at how society pigeon holes various groups.

Actually the film has a great deal to say about a lot of things. It lays out a perfectly believable tale about how someone with money can run rough shod over people, rising to his own level of incompetence. It';s also a damning look at the baser  nature of humanity as the bread and circus of real life combat escalates into ugliness. Its also a pointed take down of thing on the internet.

When the film is not throwing out out of place jokes this film is actually one of the best films I've seen in 2022. As a faux documentary that uses the form to examine society it is so spot on that if you didn't know better you would swear it was all real, thanks in large part to performances that sell everything we are seeing. It may not be real but it is damn close and we are better for it.

The problem with the film is that director Raphael Warner periodically throws out a line that breaks the mood and wrecks the tone. Making jokes about one characters suicide being a reaction to his wife's femininity isn't really funny and completely out of place. There are several  jokes like that crash not only because they are bad but also because they don't fit. they hurt a pointed satire that, with out them, is one of the best films of 2022. Thinking about it I don't know if Warner was aware of what a good film he was making  because if he did I don't think he'd have undercut himself as he does.

Despite what you think going in this film (mostly) rocks. Its a thoughtful film that will make you think about a lot of serious subjects (acceptance, out of control rich people, internet nastiness) we are dealing with on a daily basis and don't seriously ponder enough.