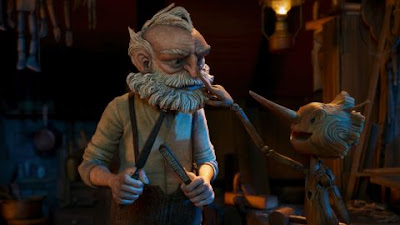 I have a weird relationship with Guillermo Del Toro. I adore him as a director and a speaker. I love the ideas he comes up with and I love listening to him talk movies. He is someone I want to sit down with to just talk movies- all movies. On the other hand I tend not to like his movies. I love the idea of them, I love pieces of them, but outside of his early films (HELLBOY, BLADE, SPIECES) I tend to be disappointed with his films as complete films. I know part of it is that by the time I see the films they tend to be over hyped. Time and again I tend to sit down to watch and not see the wonder everyone else has found. Additionally I find his original material takes these odd turns that make me wonder WTF he was thinking.(His films based on other mediums play better)

My weird relationship with the man’s films aside I was looking forward to seeing his current film PINOCCHIO. I was thrilled to get to be invited to MOMA to see the exhibition and then film and crushed when a meeting prevented my leaving work in time to go. I knew I was going to love the film.

I was so sure I would love the film that I got up early on December 9 to see it before I went to work.

And now that I’ve seen it I’m not entirely sure what I think.

The problem for me is not that the film is bad. It is not. It is in fact one of del Toro's best films, and his scariest horror film by a million miles. I think it continues to prove that he is best when working from an existing source rather than going it alone since the stories he tells without someone else's framework tend to end up messy as he throws in cool things and twists that don't always work. Yes I love the imagination, but I am more often then not left scratching my head.

The problem here is the additions and deletions that del Toro made to the material. Why did he make so many changes to an existing story if he was still going to call it Pinocchio?

What are the changes? Geppetto  is not just a wood carver but a grieving father angry at the death of his son in a bombing during World War One. Pinocchio isn't a puppet, but literally Christ coming into people's lives to change them (and yes he comes back from the dead, repeatedly).  The time is not the 19th century but 1940's Italy during the Second World War.  The island of Lost Boys is a training facility for child soldiers. I'm not saying any of the changes are bad unto themselves but why are they in this story? His doing so alters the themes and ideas of the original tale (which he is allowed to do) But it causes weird ripples such as with the Island of Lost Boys sequence where thematically we are no longer looking at the boys (ourselves) changing because of the bad things that we do, rather it becomes we are destroyed by our fathers (literally). Which would be fine except it crashes weirdly into the notions of fathers and sons that we have between Geppetto and Pinocchio (And god and only begotten son).

Truthfully I'm  still wrestling with the shoehorning of the life of Christ. Its not a question of belief or disbelief but thematically including it makes it go all sorts of loopy.  This isn't a question of something like GREASER PALACE where Christ comes to the old west,  but this is the mashing together or two stories with differing themes. I know I'll need time and multiple viewings to work it out but the story of a boy trying to find himself (this is a different shade of what a "real" boy is)  crashing into the story of an innocent Christ like figure saving the souls of everyone he meets is at times awkward. And it's not because the themes and threads don't go he together, rather it is because del Toro doesn't meld them together well enough so that we don't bring in the the ideas from the earlier/original versions. (Honestly I would love to see what a del Toro lensed Christ film would be.)

I don't know.  Is this Pinocchio or is this the life of Jesus? The mashing of stories leaves me not certain about how to really feel or think despite being moved by the conclusion.

For me the mix of original fairy tale, religious allegory , and new edgy material has a slight feeling of trying to make a commercial project that people will notice, rather than just telling the story del Toro wanted to tell. Then again he riffs on himself so much on the film it's not surprising that yet again we have a story set in a fascist state and  missing parents/children. And yes I know he is making a point about the modern world with the fascism and the greedy Count exploiting Pinocchio out of his money, but couldn't he have done so without reaching back into his greatest hits? He has hit so many of these notes before that it kind of feels lazy.

And as much as I like the film (did I say this is probably del Toro's best horror film?) beyond the changes, there are other things that don't work for me. The songs, while not bad, are more a distraction than anything. Yes, they allow for some great animated sequences, but outside of when Pinocchio performs they serve zero purpose. Pinocchio is, in his early appearance an insufferable twit. I hated him (his birth song is especially bad) and given the chance I would have tossed him in the fire during the first half of the film. Yes, he gets better but I really wanted him dead for a good part of the movie.

I also have trouble with del Toro's plotting, especially towards the end. If you know me I almost always think that del Toro's films lose their way in the final run to the credits. Here it is the case where del Toro refashions the Island of Lost Boys into a military training facility to make child soldiers for the dictatorship. While it does allow for some scary moments (and the death of hundreds of kids in an Allied bombing- this is a really dark film) it doesn't feel organic as del Toro seems to fumbling to keep this Pinocchio close to the book while wanting to take it in new directions. From there the plotting goes wonky as  we get some great horror /action sequences and Pinocchio being crucified (just in case you missed all the Christ references before) before we get the cheat we all knew was coming when the Blue Fairy first appeared. I hate that we know what part of the ending will be at the start.  Much of the last half hour while not mechanical, felt like the film it was things being moved around in order to get us to the one moment.

That said the actual ending beyond the cliched moment moved me beyond tears into actual sobbing. And it delighted me further because the film didn't end as expected. It is del Toro's most moving and best conclusion in any of his films.

Yes despite all the bitching above I do like the film, but as you can see I have issues. Its good enough that I will be seeing it again several more times down the road.

After one viewing do I think that this is as great as some have said over the last few months? In pieces, it is. It really is one of the best animated films of the year, but I wouldn't say it was the best. Is it the best version of the story? I'm not sure. Some of the others work better as a whole but they don't have the sequences that this film does.

Is it worth seeing?

Absolutely. Though Parents might want to see it before plopping their young kids down since there is a darkness that isn't in any Hollywood produced animated films.