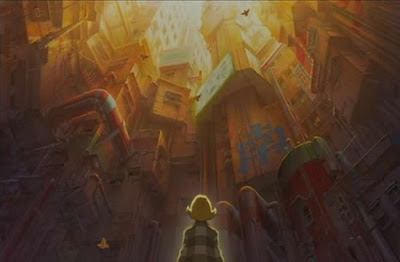 With METROPOLIS playing the Japan Society on Friday here is a post from 2012 that  is based upon a journal entry I made after seeing Metropolis for the first time in 2001. If you've never seen this on a big screen you MUST go see it.

I saw the animated Metropolis which is based on Osamu Tezuka's comic inspired by the Fritz Lang film.

Visually its one of those ground breaking animated films that the Disney Studio thinks they've been doing for years, but haven't been.

Visually its a masterpiece, on odd mix of cell and computer animation. It's incredible.....

Storywise...its good. not great. I wanted to jump ship after twenty minutes of visuals overwhelming the story,but I'm glad I didn't, suddenly it kicks in and well its not perfect but it has neat little things in it. Its like the characters and the city-the plot gets lost in this vast maze. I honestly don't know what to say, about it beyond that...

The use of music is beyond masterful, so much so that at one moment toward the end (Ray Charles) I suddenly found myself siting up and going, "holy shit, there's a hell of alot more going on here then I thought" I wasn't certain what it was but it was going on....

Yes, its a masterpiece, yes it takes things to the next step...I'm not certain what to make of it wholly, its better than Akira for certain...

Watching this in the theater for the first time I keep asking when, if ever will American films be as daring and as technically brillant as what the Japanese were doing. I know that part of my uncertainty was the result of simply knowing what I was going to see in advance...of course it was the next step in animation, I saw that in the trailer...

The things that are being done in Japan are light years ahead of whats being done here....

This, along with Escaflowne (which was playing down the hall when I saw Metropolis) are pushing the visual medium farther than ever before....these are films which could never be done live action, who's stories need the medium of animation to be told visually....

The movie started and my first emotion was Disney is f***d. I know I harp on Disney but they have not done anything ground breaking in years-their idea of pushing the envelope is to release a feature in Imax 3D. Atlantis was a half an attempt. Its bold daring story was hampered by the Disney need to be family friendly. Family friendly is good for the pocket book but stagnates the medium, and will kill them in the end. Why are Pixar and Dreamwork films big hits? Because they aren't Disney.

The last daring thing that Disney did was Nightmare before Christmas, but they at first distanced themselves from, lest it blow up in their faces.

As uneven as Metropolis is , its still more daring in what it does than anything Disney has done... Which is why Columbia Tristar has released it.

Kudos to them for letting us see, on a big screen a landmark in the history of animation.