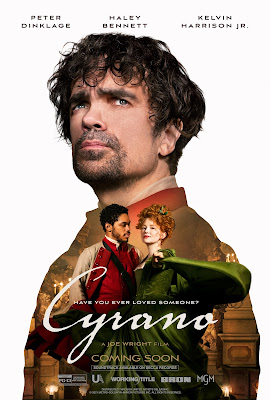 A year after its release I finally caught up with the musical CYRANO starring Peter Dinklage. It was high on my must see list because I had seen the stage version Off Broadway three years before.

Rejiggered so that the nature of Cyrano was his height instead of his nose, Cyrano tells the story of a brilliant outsider in love with a woman named Roxanne. He knows his size will not allow her to love him so he lives his life longing for the woman he loves. When a she is smitten with a good looking oaf named Christian he helps the lad win the heart of the girl he loves. However the desires of a duke and a war that is raging outside their city will bring sadness to everyone.

Taking the classic story and putting it into the real world CYRANO comes across as oddly uneven. Using the music by several members of the rock group The National, the staging the musical sequences don't always work. What you could get away with on stage here comes off as odd with the dances seeming out of place. Additionally in opening up the play with real locations the intimacy of the stage production is lost.  Yes, we have theaters and palaces and the like but the characters get lost. One of the things that made the play work was that we were there with Cyrano in the theater, in the trenches or in the streets. For whatever reason director Joe Wright, who can handle epic films, loses his characters in the frame.

I missed the closeness of the stage.

I also feel that something was lost in the script in shifting  the show to the big screen. I had thought the film had removed some material  from the play, however the run time of both are comparable, so its not a matter of straight deletions.

On it's own terms the film is good. Its a gorgeous looking film that more or less does justice to the classic story. It also shows just how good Dinklage is, since he is light years beyond his material.