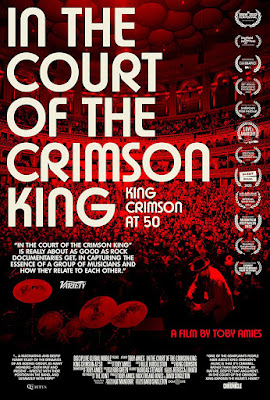 IN THE COURT OF THE CRIMSON KING is a blast.

While I am not any sort of King Crimson fan, I enjoyed the hell out of the film.

The film is meticulous look at the band and it’s head Robert Fripp. It’s a behind the scenes look at the groups 50th anniversary tour and it’s trip and a half.  Yes it looks good and yes it sounds good, but it also is film that doesn’t try to sugar coat anything, which in a weird way makes it kind of sugar coated, because despite Fripp being an ego centric perfectionist, he still comes off as strangely charming. He’s such a  charming SOB that Fripp acknowledges that the current line up of Crimson is the first one that has doesn’t include anyone who hates his guts.

I don’t know what to say more about the film other than I had a blast. I loved everything about it. Not only is is a great music documentary its just an entertaining film, which is rare accomplishment.

Highly recommended the film is currently playing in theaters across America and the globe.