Something in the Dirt 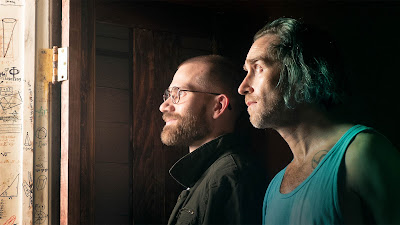 All independent filmmakers should aspire to achieve what Aaron Moorhead and Justin Benson are able to in Something in the Dirt on a budget. The movie takes place in an Los Angeles that feels fairly removed from reality. If LA were dreaming, this is perhaps how it would sound and how it would act. The far-away and indistinct whirring, the creeping disasters just on the outskirts of the film, it all encases Moorhead and Benson’s film with an inescapable, existential dread. The audience is introduced to Levi (Benson), a bartender who has just moved into a new apartment. He quickly befriends his strange downstairs neighbor John (Moorhead) and the two discover that there is something off in Levi’s new apartment. Magnetically, psychologically, spiritually, they can’t put their finger on it, but something is not right and there are continual events that cause them to question the reality they’re in.

The filmmaking aspect Moorhead and Benson excel at here is primarily how they reveal information. We learn key aspects of each character slowly and are doled out plot points at a very specific pace. For example, we are well into the movie before we realize that what we are watching is a meta-fictional documentary about these events that John and Levi have since funded, and that not only is what we are watching “not real” in the sense that it is a movie, but it is also a recreation of what Levi and John witnessed within for their documentary within the movie. This information is slowly revealed so that we are able to marvel at what they witness before we realize that within the world of the film, it is also faked.

Something in the Dirt strikes me as one of the great films about the internet. In fact, it would pair well with the internet-conspiratorial notions at play within Nope or even the facade-ridden We’re All Going to the World’s Fair both released this year. While Moorhead and Benson don’t offer a specifically new perspective on the issues at play with the internet, they visually capture “internet brain” unlike anything I’ve ever seen. The visual language feels very attuned to how we tend to receive information through Reddit, through Twitter, or even through Facebook. And then they intercut it with moments of visual grandeur that are larger than one would expect in a film with a small budget. While I worry some of the curiosity of a first viewing would fade with repeated exposure, it is one of the most fascinating film-going experiences I’ve had in 2022 and remains one of the year’s better movies.