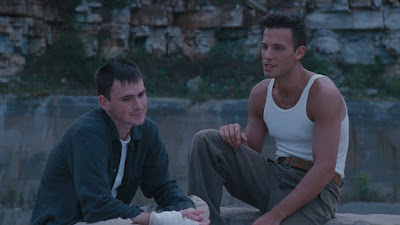 In 1997 Mark Pellington made a film of Mark Wakefield’s novel with a cast that included Ben Affleck, Rose McGowan, Rachel Weisz, Jill Clayburgh and Lesley Ann Warren.  It’s a film about two vets returning home from the Korean War and having to navigate friendship, love and society in the staid days of the 1950’s.  The film was released to some acclaim.  During the early days of the Covid lockdown Pellington happened upon a copy of the original directors cut of the film, running around three hours and intrigued by what he saw there he started to re-edit the film.  Liking what he saw he showed the film around and Oscilloscope decided to release the film.

If I ever saw the original cut of the film, it would have been around the time of the original release. Since I have no memory of doing so I am not going to compare the two versions other than to say that the original cut ran 103 minutes and this new one runs 126 and contains a reported 50 minutes of new footage. Basically Pellington has replaced half of the film with new material.

This new cut  is good but I’m not sure if it is the sort of thing that we needed a nee version of. While I liked the film enough that I am willing to see the original version, it is not a film I am likely to revisit. Yes it’s of interest for the cast but the film just sort of is.

In turning the film over In my head the problem with the film is it is too tied to the novel. We have a narrator who gives us details about things we wouldn’t know otherwise. Additionally there is a kind of formality to it. This is a film that is very much a “film” and not something that is alive. The scenes seem too formal and staged. We aren’t watching life but a theatrical representation of it. It’s not that say the dialog is bad, it’s not, rather it’s no one speaks quite like that.  The result is that the film never connects to us on an emotional level, only on a distant “this is literature, it’s good for us” sot of a way.

Ultimately this isn't bad but its really just of interest for the cast.