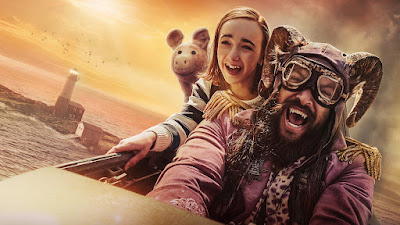 After a long time away from Netflix SLUMBERLAND got me back the service. Being a huge fan of Winsor McKay’s Little Nemo in Slumberland, I had to see this version.

Outside of some character names and a setting in Slumberland the film has nothing to do with the original comic. This time out the  film concerns a young girl named Nemo who lives in a lighthouse with her dad. When he is killed in a storm, Nemo is sent to live with her uncle in the city. Finding herself going to Slumberland in her dreams she meet the giant Flip (Jason Mamoa), she learns that if she gets to the land of Nightmares she can get a pearl that will grant her any wish, in this case see her dad again.

While the over all plot isn’t anything new, SLUMBERLAND has some great things going for it. There are some killer set pieces (the dancing leaves), wonderful repeating motifs (the various dreamers, especially the kid driving the truck) and a killer performance from Jason Mamoa. Say what you will Mamoa is just so much fun as the crazed Flip. It maybe my favorite of his roles. The film also has Pig, who is a stuffed pig  that is such a delight in his small role it’s actually criminal. Who ever was animating Pig was clearly having fun and the result is some charming throw aways that add so much to the film.

As long as the film is in Slumberland I loved this. I mean, the real world stuff is too by the numbers to not be ho hum and one twist we saw coming (and despite that I did get misty) but at the same time this is a film with its heart in the right place.

While not likely to thrill Little Nemo purists, its still an entertaining riff on the material and worth a look.