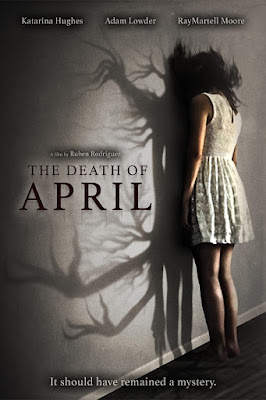 Megan moves into a new home. Using her web cam she keeps in touch with her family as she documents her life.  Things become complicated as Megan becomes obsessed with the "ghost" in her bedroom.

Found footage horror collides with a faux documentary with mixed results. As we watch Megan's friends and family talk about her undoing and we see the footage that documents what happened.

As many of you know I am mixed on found footage films. I love when they work, but more times then not they tend to require the filmmakers to either fill time out with things that would never be filmed or they have to cook the books and show us things the conceit would never have captured. Worse so much of the found footage feels fake with everyone overly playing to the camera.

THE DEATH OF APRIL gets around much of that by filling voids with interview footage. The interview material is very good. The problem is the found footage material is the cursed playing to the camera. It feels over done. It's not fatal but it reduces the tension.

Quibbles aside this is better than a large number of the recent VOD horror films and is worth a look.