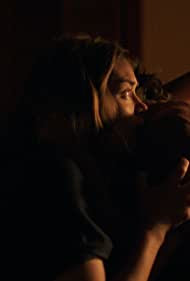 Cosplaying therapy to overcome ruts within a relationship and help your partner move on from their trauma doesn’t exactly sound like the most horrifying plot of a horror movie, but Mother, May I? from director Laurence Vancinelli uses that basic idea to propel his psychological thriller into full-blown horror. Emmett and Anya have made the trip to Emmett’s childhood home in the process of selling the house following his mother’s death. Their plan is to stay there for multiple days as they get it fixed up and line up the sale. Vancinelli, though, makes it clear pretty early that Emmett’s relationship to his mother and this house has more than just the typical familial complications, and Anya occupies the role of therapist in their relationship due to her own parental trauma.

Anya, whose parent was a therapist, uses whatever techniques she chooses to try to help Emmett overcome his own past, and it appears that prior to coming to this house, this dynamic had been generally successful in their relationship. It turns out, though, that the space his mother occupied for decades is too much for either of them as Anya starts to dress, speak, and behave literally like Emmett’s mother at all times.

Vancinelli’s film is most successful in its quietly horrific moments. The times where Anya acts or moves in such a way that goes beyond what she would've known of Emmett’s mother are utterly haunting. As Mother, May I? tiptoes the line between domestic drama and ghost story, it becomes impossible to imagine how this relationship could ever recover, and the viewer is left wondering what violence is destined to be unleashed in this environment. Mother, May I? was one of the truly singular experiences of the Brooklyn Horror Film Festival and stands as one of the best genre movies of the year.