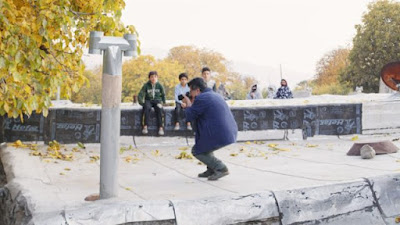 Jafar Panahi travels to a border town in order to direct a  movie remotely. The actors and film crew are across the border and are taking directions via Zoom.  As Panahi struggles to get the film finished be becomes involved with two sets of lovers, two of the actors, and two people in the village where he is staying. Both pairs want to flee to somewhere safe, something that might not be possible
Panahi is not loved by the Iranian government. As this film was hitting the festival circuit the director was being put into prison. Prior to that they had tried to restrict his ability to make films but he managed to work around the obstructions. The result has been a unique series of films where the filmmaker is the subject and the films transcends the notion of autobiographical cinema.
This time out Panahi has made one of his most affecting films. Forget his personal situation, this story of life in a small town and in a repressive country will leave you shattered at the end. Panahi is juggling a lot of balls in the air and manages to manipulate them perfectly. First we have his situation which is basically hiding out in a small town to make a movie he shouldn't be making. In showing us what it takes to make his film we see how the small minds of the village express an openness that really isn't. there This ties into the story of one of the couples, a doomed romance Panahi captures in a photo, that everyone wants to see, but which he deletes and denies having. It seems the young woman has been promised since birth to someone she doesn't love and that someone needs proof to hurt the girls true love.  At the same time the lead couple in Pahani's film are making a film based on their lives and their efforts to flee to the West. However the need for official documents complicate things. All of the threads end in darkness for the characters and soul searching for the audience.
I love Panahi's films. I make every effort to see every one I can because he always speaks a truth that needs to be heard. I also find that how he is forced to make films ends up making films that are much more real than if were making just a straight narrative.  They are so much more interesting because we have to think about how he did what is up on the screen. His are films that are alive and in the moment.
I was rocked by this film. I did not expect the turns, and yet every one is perfectly placed.
One of the best films I saw at this years New York Film Festival, it is a must for anyone who loves humanity.
Posted by Steve Kopian at December 20, 2022