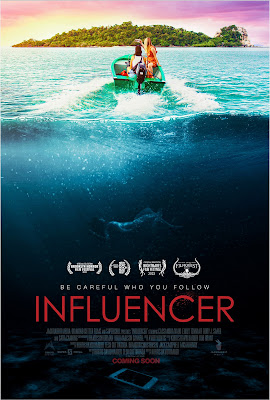 Kurtis David Harder and his crew took the opportunity with their film Influencer to travel abroad in a beautiful place, in this case Thailand, and make a fun movie. They followed the Adam Sandler comedy model, and to do so after initially being delayed due to the pandemic is commendable. Unfortunately, the movie they made, while being intermittently interesting, is no more memorable than any of the movies Adam Sandler made abroad with his friends.

Influencer follows a social media influencer named Madison who travels solo to Thailand. While on vacation there, she meets a mysterious woman named CW and to say much more about the plot specifics would be too much of a spoiler. One interesting component of Influencer is that Harder and team opted to follow Hitchcock’s Psycho conventions and are frequently attempting to turn the audience on its head in similar ways. The problem with this is that by adhering to that formula, the film is absolutely incapable of saying anything interesting or fresh about influencer culture. You may be tempted to say to me, “Well, Hitchcock didn’t attempt to say anything about bank tellers in Psycho,” and if so you may be correct, but he also didn’t name the movie Bank Teller.

Although some of the violence is well-executed and the lead performance is excellent, Influencer is far too derivative, both narratively and stylistically, to offer anything of much interest to the audience.