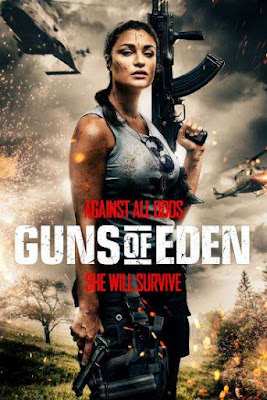 Still reeling from a robbery gone wrong, ex cop Meghan, is talked into going on a camping trip with some friends. No long after arriving they stumble upon a  group of sheriff's executing a drug dealer.  Now being hunted by the bad cops, Meghan and her friends must fight to survive.

While GUNS OF EDEN covers a lot of familiar territory, it lifts itself up by giving us some kick as action and good characters. That's a rave boys and girls, especially since this film covers similar territory of the half dozen or so MOST DANGEROUS GAME retreads we've seen in the last few years.  I was absolutely delighted to have one of these films make me pause the film go make a big bowl of popcorn and get lost in it.

While the low budget results in a couple of giggles(an arrow not going into the eye of a baddie) the film is pretty much devoid of missteps.