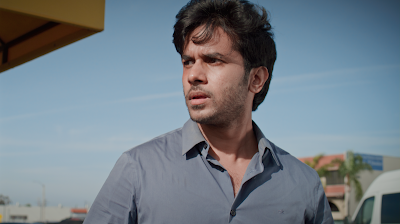 Sripal Sama's multi-character drama is a hell of a good ride. It's the sort of film that on the face of it looks like it's one thing and reveals itself in the end to be something wonderfully different.
...MONDAY is nominally a caper/ crime film. I say nominally because the film is set up by a bunch of bumbling thieves breaking into a house and things not being as expected. Their target is gone as they try to complete their mission we, and they run across various people who figure into things, including Shyam Kumar who is the focus of the action and who is having a really bad day. While the criminal activities of the gang set everything in motion the real point of the film is not crime but human interaction on the best level.
One of the things that I really love about the film is that Sama doesn't follow the expected Hollywood path. Not only does the plot not bend as we expect it to, but he doesn't give us a typical Hollywood lead. Kaushik Ghantasala as Shyam is an Indian programmer trying to find his way in life and America is fantastic. He gives a fantastic performance that hopefully will get him bigger roles. He is wonderfully not all American but still tied to the land of his birth. This allows Sama to open us up to the world, not just Hollywood idea of it. He uses Shyam as a main character to give us  new rhythms to experience as the film moves along in its own course and time, forcing us to fully engage since we are listening to the beats of a new voice in film.
I should say I'm not going to be saying much more about the film because this is a film thing that is very much the journey. This is about the hows and whys the characters crisscross so if I am to discuss how certain people meet up it will take some of the fun of you trying to sort out how everything ties together. Additionally I want you to take the journey of the characters  not knowing where their beats and rests are going to be.
I will add that the film scores many points with it ultimately being about the characters. This isn't a "caper film" where the characters all are out to get the Mcguffin, rather this is about the characters and how they are reacting to the things that are happening/crashing in their lives. Yes less about the robbers, and more about everyone else. This is a film where everyone is arcing not being one note.
If I am to quibble with the film it is with the opening scene. Introducing us to characters who will show up later in the film, it doesn't grab us in the right way. The billionaire who is at it's center is not someone we want to know. As a result its cliffhanger ending is not something we care to see resolved. The film should have started with the one after the opening credits which grabs us and pulls us instantly into the film. The early morning delivery, is funny and it's the point where we lean into the film and decide to take the ride (and you will want to take this ride)
This is a gem of a film that you will need to search out. Sripal Sama has made a wonderful little film that surprises at every turn. I can't wait to see what he does next.
Posted by Steve Kopian at December 08, 2022