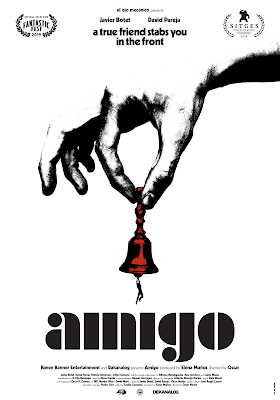 Best friends and occasional comedy partners Javier Botet and David Pareja go dark in a film that will make you look twice at your best friend.
After Botet is badly injured in a horrible accident Pareja take him to his remote home to convalescence.  Things are okay at first but slowly the resentments and suspicions begin to rise to the surface and the pair  begin to act out against each other.
Bleak, black, cruel and containing s dash of humor too dark to not get caught in your throat AMIGO is a bold film that may echo other films (MISERY, BABY JANE) but is ultimately a poisoned confection of it's own bloody making. Containing two of the best performances I've seen in years in any film, AMIGO is a stark reminder that we don't need effects or scary music or other cinematic tricks to create absolute tension.  This is a film that, like the best magic, tricks you into thinking it isn't going to show you wondrous because there is nothing flashy on the surface but in reality  was a trick to have you put guard down.
The casting of Botet and Pareja was brilliant. Not because they play against type (not having seen their comedy I wouldn't know their humor) but rather because being friends they can do things that random actors couldn't. There is a sense of closeness that isn't faked. Additionally because they are friends their is trust that allows them to push the envelope.
Shot in a week and partly ad-libed  the film isn't always perfect with some threads left hanging, the film still packs a punch. I know some will not like the slow burn build up but those that can click with the film and it's pacing will find  themselves in the middle of a deeply troubling film where everyone is a loser.
Posted by Steve Kopian at December 01, 2022