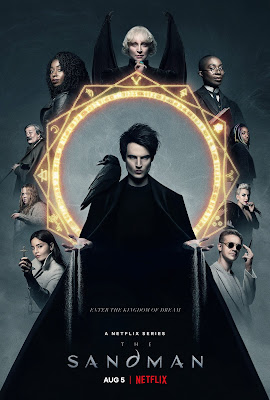 Neil Gaiman’s classic comic series comes to television  after decades of failed attempts. With changes here and there, notably with some gender swapping of some characters, the show arrived on Netflix more or less intact….

And that is the exact problem. In marching through the first few story arcs the film doesn’t really take many chances.  Because it is attempting to put the comic on to film, it isn’t bold and daring in it’s telling. Looking exactly like a British TV series it doesn’t stand out for any reason other than it’s source. Yes the two “surprise” one shot stories break the mold and stand up magnificently, but they can do that since they are stand alone and don’t have to tie into the series as a whole.

This is really a by the numbers TV series based upon a ground breaking and world altering comic series. My personal thought was that the series should have been animated, with each arc being in the style of a different animator or artist since one of the reasons that the comic series was so ground breaking was that the art was just as big a part of the story as the words since they set a headspace where it all took place. The problem with the series is it all looks like so many other series. Yes the series finds time to pull key images from the comic, but  mostly it looks like everything we know, which is a damn shame for a story that changed how we see the world.

And lest you think I’m kidding about the world altering part understand the universe was radically altered by Sandman because it changed generations of people who altered the way they saw the world after reading the comic. Trust me, the appearance of Sandman changed the world in the same way that elections, wars, and technological break throughs do.

I really wish that Gaiman and his writers hadn’t bent to pressure to keep things intact and had taken the basic stories and not thought about breaking new ground and making us rethink how TV tells a story.  Why couldn’t he have told the tale the same way he did the comic which was break the mold.  I shrugged when Dream tries to take the Corinthian back to the dreaming only to find himself pulled to the mansion. It was done so in a by the numbers shots with  dialog that was stilted and pure exposition. It was then that I knew the series was kind of doomed, at least for the first season, since there would be no bold choices.

While the series isn’t bad, it’s really not special. It’s a series that feels like it exists because “if we don’t do it some one else will break it”. I really wish that Gaiman and crew had done it because they had a new way of telling the story as opposed to making it sure another version doesn’t kill their cash cow.

Full disclosure I have never been a  super fan of the comic source. I found it good but I never found it the life changing experience so many people in my life did.