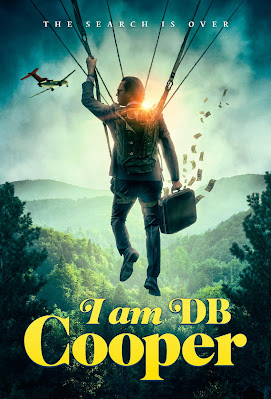 Rodney Bonnefield claims to be DB Cooper and he enlists the aid of a couple bail bondsmen and a film crew to go and dig up the money he buried almost a half century ago.
One part recreation and one part documentary I AM DB COOPER is a hell of a ride. The story of a man who insists he was the notorious hijacker this is a tale with twists and turns and unexpected occurrences. I'm not sure how much of this is true, but it was one compelling time at the movies.
It helps that Bonnefield is a compelling chap. He sells his tale with an absolute certainty you don't often find. There are a lot of things he doesn't say that make me wonder if his tall tale is true, but the things he says, like having an affair with Rita Coolidge, made me want to lean in.
As you can tell I'm not buying the story, there is something wrong about it all, but that doesn't mean I'm no in love the story and it's telling. I think the reason the film works is that director T.J . Regan doesn't do anything special except let the story stand.  Yes he recreates portions of it, but at the same time he does so that we lean in to find out more.
While I have no idea if you're going to buy the tale as proven fact, I do think you'll love the story.
Recommended
Posted by Steve Kopian at December 07, 2022