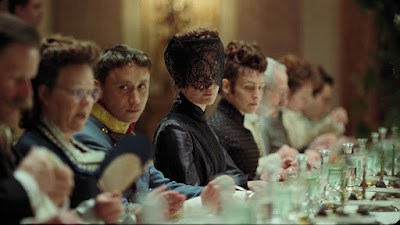 Vicky Krieps gives  an award worthy  performance as Empress Elisabeth of  Austria during a period in 1878 when she struggles to deal with the restrictions of he social place.

First things first, this is not historically accurate. Intentional anachronistic items aside this is not what happened in real life. I mention that up front because I wanted to see how close this was to what happened only to find it’s nowhere near reality and that this is the same character that Romy Schneider played in the Sissy films.

Director Marie Kreutzer isn’t history but is interested in looking at what it’s like to be a woman in an “important” role and yet being completely ignored.  Actually it’s a film about what it’s like to be a woman who is being diminished just because you are a woman. It’s a trippy account of what do you do when you have more money and power than is healthy and nothing to do. This is a tale of the idle rich who  doesn’t  want to be idle.

I honestly don’t know what the film is ultimately getting at. The ideas and themes seem to be just outside of my putting them together. At the same time I was completely enraptured by the film. Even as the film gets more and more surreal as Elisabeth feel more and more out of sorts I was getting more and more invested. It all just made perfect sense. (Trust me you just have to see this and just go with it)

This is a really good and very compelling film