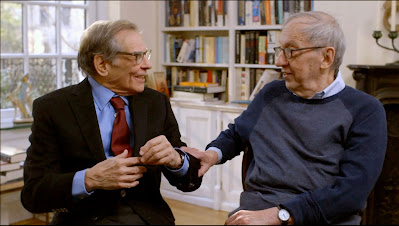 If you love reading and writing this film is for you.  Lizzie Gottlieb, daughter of Robert makes a film documenting the relation ship between her father and writer Robert Caro as they race to finish the final volume of Caro’s biography of Lyndon Johnson before time and tide stop them.

Actually the film is not just on the men and the Johnson book but about the lives of both men over the course of 50 plus years. Along the way we get a picture of life and literature over those years as well as what it’s like to write and edit books. It’s a cut throat business where even the use of a semicolon can end up in a major blow out.  The film is also a bunch of very intelligent people talking about intelligent things in a very witty manner.

Seriously, in an age where we are flooded with meaningless documentaries about empty headed pop stars who are only good at self-promotion or documentaries that are more flash than substance. TURN EVERY PAGE is a refreshing change of pace. I suspect that some people won’t like the heady talk but then again they probably aren’t the sort of people who would like either the books Caro writes (The Power Broker) or the one Gottlieb edits (Catch 22, Beloved, Midnight Cowboy…)

This film is a delight for anyone who likes ideas. Its a film for people who want to think and not just be distracted.

One of my favorite films of Tribeca and 2022.