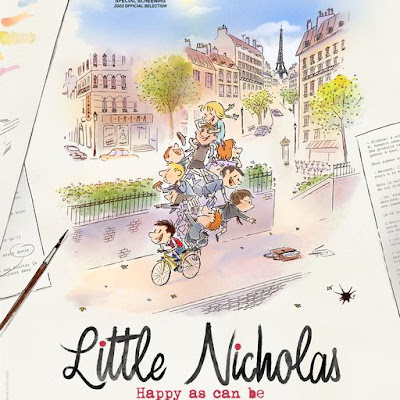 This film is a delight. It’s a “hand drawn” film that is certain to put a smile on your face. It’s a celebration  of a creation and the creators that is just a lot of fun. I just chuckled my way through the film from start to finish.

While the film is good fun from start to finish, I’m not going to lie and say it’s perfect. The sections of the films on creators René Goscinny, and Jean-Jacques Sempé where Nicholas isn’t involved are less compelling. Yes they are good, but the problem is its about the life of grown ups which makes them less fun that Nicholas. The Nicholas stuff is a blast and I’m so annoyed that I never ran into him before this.(I will have to track reprints down)

While the film is on the festival circuit (it opens Animation First in NYC in January) it is opening Friday in Los Angeles in order to qualify for an Oscar and is the film is absolutely worth your time. It