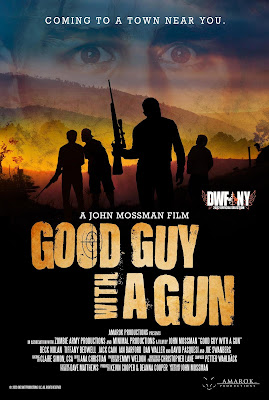 After his father is killed trying to stop a robbery, a young man and his mother move to the country. Falling in with some guys who like to shoot guns, both mother and son find their relationship strained. However things begin to take a darker turn and its not certain they will survive.

This is a really good drama/thriller. The reason the film works is that we are introduced to a number of atypical characters. Say what you will most of the people are not the sort of people we typically see in films and as a result the film is so much closer to real life. The small moments, outside of the main plot lines, carry atypical weight.

The film is being billed as a look at guns in our society from the stand point that things are not as cut and dry as the media would have us believe. I think the film succeeds in what it trying to do, this is a good drama that makes it clear that guns unto themselves are not bad. The problem is always the people handling them.  At a time when everyone is blaming guns for shootings, GOOD GUY WITH A GUN makes it clear that we need to really examine the issue beyond viewing it as a black or white matter.

On top of the message, and more importantly, this is a really good drama/thriller. Its not something we've seen a million times before.