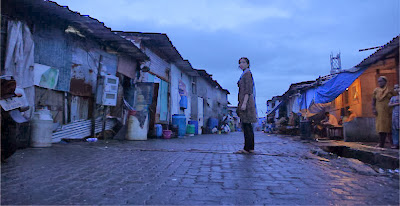 A woman hires a man to paint a wall in her apartment.  While she is another room she  hears a crash and returns to discover he has collapsed. After she gets him to the hospital she then tries to track down his identity

Short and sweet story about dislocation, isolation and how we are connected or not to each other. It's an okay  film that has a kind of verite feel (I'm guessing owing to it's semi-improvised nature). The problem for me is that once the situation is setup the film doesn't really go anywhere with it. We have the quest to find out who the man is but just keeps going and going, not really going anywhere. Yes it feels real but it never adds up to much. Its not bad it just left me feeling uncertain of why I was being told this story.

On the plus side the film does have great cinematography and we are clearly in real places with real people.

While I like some of the film it never came together for me.

The film plays tomorrow afternoon as part of the South Asian International Film Festival. Details and tickets can be found here.