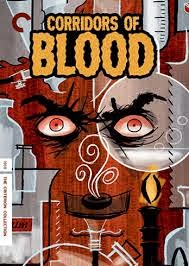 Another from the Criterion Madmen and Monsters set. Here Boris Karloff is a doctor trying to find away to end pain during surgery. Regrettably he becomes addicted to his drugs and all sorts of havoc ensues.

Better in many way than the co feature Haunted Strangler, this boasts a super performance from Christopher Lee. The problem is that this is tough going when viewed close to the Haunted Strangler since in some ways its more of the same (which isn't too far off since the films were made somewhat back to back). Watching them back to back, as one is prone to do with double feature sets I found my attention wandering, which is very unfair because this is a good movie.

Heavily censored upon initial release this is a dark and cold film where everyone appears to be on the make or damaged in someway. (The cut material is included as an extra in the Criterion set; which also has an excellent commentary).

I really do like the movie, I only wish I had watched it spaced days apart from its co feature not minutes.
Posted by Steve Kopian at December 13, 2013