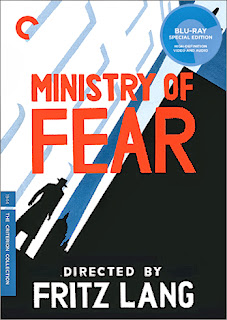 Fritz Lang's adaption of a Graham Green novel concerns a man named Stephen Neale who is released from an asylum and into the thick of the English countryside at the height of the war. Stopping in a small village on his way to London he walks smack dab into the middle of what turns out to be Nazi spies/sympathizers. Soon he's on the run and not sure who to trust.

The edition put out from Criterion is a beautiful thing with a nice crisp transfer and a couple of extras, namely a brief essay and a 17 minute discussion of the film in relation to Lang's career. The extras are pretty good, but the truth be told that after watching them I found myself so full of extra baggage I wasn't sure any more if I liked the film or not, or even if the film is any good on it's own terms. For that reason I'm not going to refer to anything in the material and just talk about the film.

Ministry of Fear is a good little thriller. Its a brisk moving film that doesn't behave like most other war time thrillers. There is a nice cynical edge and a sense that film noir is coming.

Here is a film where, for the most part, we can't be certain who the good guys are and who the bad guys are, Everyone that Ray Milland's Neale meets could be on either side. We can't be sure who is who until the very last minute, and even then there is a nice sense of paranoia that hangs over everything.

To be quite honest I'm not sure why Criterion has chosen to put the film out in a special edition. Outside of it being directed by Fritz Lang the film really isn't particularly outstanding. It is at best a B level thriller of the sort that Hollywood had been cranking out all through the war, though granted it paranoid feel is atypical. I do like the film, I just have no idea why people consider it some form of lost classic.

Worth a shot or even picking up if you can get the Criterion edition cheap enough
Posted by Steve Kopian at December 02, 2013