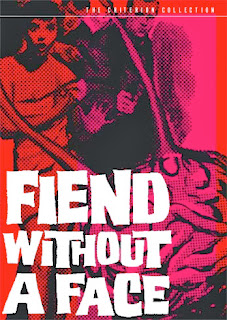 I’m still trying to get my head around the fact that Criterion released Fiend Without a Face. Don’t get me wrong it’s a great little horror film, but it doesn’t seem like a Criterion release.

Set near a military base Fiend follows what happens when a military project rips open a rift between worlds. Through it comes invisible beasties which begin killing people. As events transpire group of people end up hiding out in a house as the invisible beasties lay siege. A timely alteration by one of the scientist turns the invisible visible and it’s revealed that the source of the attacks are evil brains with antenna and tails that they use for leaping and holding on to their pray.

Don’t deny it I can hear you snickering.

I know the idea of killer brains sounds stupid, but there is something about them that makes your skin crawl. The brains are a combination of props and stop motion models and they are creepy as all hell. It’s a combination of the motion and the texture of the monsters coupled with icky sound effects. And speaking of icky, when these guys die, they ooze and bleed in a manner that is stomach turning. Yea this film is from 1958, but the gore effects are 1980’s. I’m kind of shocked that they got away with it.

Well I love the final half hour. I love the siege. It’s during the siege, which kind of pre-dates night of the living dead that the film breaks away from being a typical 1950’s science fiction film into something else. You can tell how good the climax of the film is because you’ll never hear me talk about anything else. Yes the opening is good, but the end is great and it’s the think that will have you asking for more brains when you’re leaving the theater.

A small scale underappreciated gem that is lucky to have Criterion handing it’s release.

A must see for monster lovers.
Posted by Steve Kopian at December 09, 2013