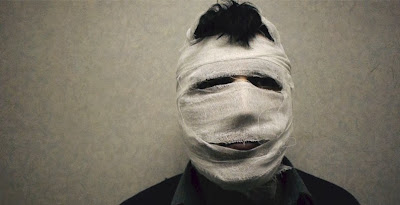 The second film from Hammad Khan is making it's World Premiere tomorrow at the South Asian International Film Festival and I suspect that much like his first film cages will be rattled and the film will end up causing a firestorm.

The film follows a man whose head is wrapped in bandages. He is driven to a park where he kills five people.He then drives off in the cab where he is let off on the side of a road. He meets a police officer and asks to be arrested. When the cop refuses to do so, despite being  willing to take the strangers money he too is killed. From there the film becomes a journey as the man has a series of encounters with people before the it changes into something else.

Opening with an explanation of the title, the film is essentially a look inward,nominally of the main character but it is in reality a meditation on the state of affairs in Pakistan. Actually the issues raised a work on a larger level and echo to the state of affairs in many countries and places across the globe. I know that watching the film many of the points about corruption, apathy and relationships hit home.

I know if you read the description of the film it will seem as if its a serial killer film or a thriller, but the film isn't operating in those genres even if it co-ops some of those motifs ( at least for a while). Khan is not making a conventional film but instead is making a film the seriously engages your brain. This is social commentary meets art film meets satire mixed with humor. I sat down to watch the film, figuring based on a one line description, I was in for a thriller. I got something else instead.

This is a film with something to say, and it manages to do what most similar films never do and that is be engaging on it's own terms. While I can wax poetic about the film for any number of reasons, probably the best thing I can say is that I very much want to see the film again. This isn't just a good (fill in the blank) film, rather its a good film period with out a qualifier. Even if you chop away the commentary I'd still like the film

This is a film that needs to be seen, not just by the South Asian film audience, but people everywhere. The problems with the world, the desire to "kill" people and their different thoughts is universal. This film is a poke in the eye not only of Pakistan but society in general.

Treasures like this are not only the reason I go to film festivals but also the movies in general. Its rare that we get a film that can walk the line between genres and shake them up and when we get one we must spread the word. Consider the word spread, and get down the the SVA Theater tomorrow.
Posted by Steve Kopian at December 03, 2013