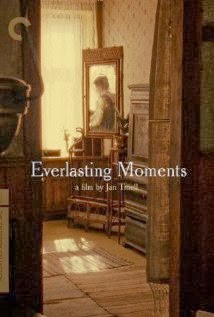 Before the First World War, Maria Larsson, a woman with several children and a not too bright husband who drinks, is barely getting by. Life is crushing her driving out all of the color. One day she wins a camera and slowly comes back to life.

Slow brooding true tale of life lived is a visual treat. Shot to resemble old film and photographs the film's look changes as Maria comes to life. What was once static shots, move, what was once black and white becomes color. In its way its life as film. The look of the film, the composition of shots and creation of sequences is pure magic. There were times when the simple beauty of the images had tears rolling down my eyes. Its the cinematic parallel of the moment where the photographer who has been giving Maria chemicals and film forgiving the debt in exchange for a copy of one her photographs, its a film so beautiful that you'll need to possess it.(I snapped up the Criterion DVD as soon as it was released).

This is a very good film, and I like it a great deal, but I'm not overly in love with it- though there are moments such as Larsson photographing the dead that haunt me still. The reason has to do with my own tastes and not those of the film. I'm not a person who tends to gravitate toward films that deal in bleak lives. Certainly things do brighten once Maria finds the camera, but at the same time its still a hard hard life.

My foibles aside, I do recommend the film, especially if you can see this on a big screen with a good resolution. There are images and moments that will take your breath away and make tears roll down your cheeks.
Posted by Steve Kopian at December 28, 2013