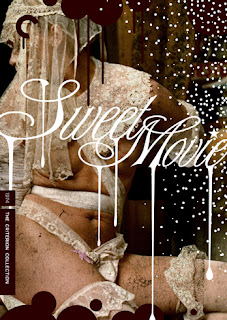 What drug addled mind came up with this piece of weirdness?

The richest man in the world marries the best virgin (the winner of a contest) and then takes her home where their first night is less than stellar. She is nearly drown when she wants out of the marriage. She is then carried off, made love to, put into a suitcase and sent to Paris and it goes on from there. Of course there are side stories about the captain of a barrage that has a giant head of Karl Marx on the front. And there is a pause to visit the collective of Otto Muehl.

My original review at IMDB (which this piece is based upon) was very negative. I really didn’t care for the film much but I’ve revisited this film many times and while I have no idea what to make of it I am still haunted by it. I know that there are at least two versions of the film Shocking Videos long ago had a set with both versions but they’ve since gone the way of the wind and now the only way to get it is in Criterion special edition.

What is Sweet Movie? It’s a mind game that seems to exist only to push buttons. I mean why else would it have the graphic scatology, gold plated privates, Nazi death camp footage and a dream like sense of reality? I don't honestly don’t know if there is any reason for it to exist other than to make people think it has to have a deeper meaning. It’s a film that forces you to fight with it to try and work out what it’s all about if anything.

Of course the film could be a joke on the audience and on film goers who must try and find some deeper meaning to everything.

Joke or jewel the choice is yours. If you want a film that is its own animal I heartily recommend this, hoever kee in mind this is not for kids, or even most adults, this is a movie only for those who want to have their buttons pushed.
Posted by Steve Kopian at December 19, 2013