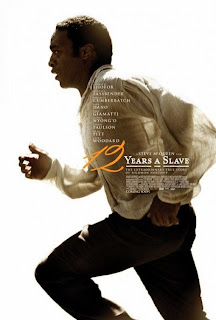 12 Years a Slave didn’t move me. While I like the film, I’m completely bewildered at the crazy love the film has gotten from most corners. I’m at a loss to see what people see in it that makes them rave so.

I should probably state at the start I am not a fan of director Steve McQueen. While I don’t really hate either Hunger or Shame I’m not really a fan of either. I find his style distancing, He can be so clinical that all life is drained from his subject. I also feel there are times when he is so intent on making a point that one disconnects. In Shame we had sex scenes that went on and on as Michael Fassbender fell from grace and in 12 Years we have the steady march of violence and cruelty. There is so much violence and cruelty that I wouldn’t bat an eye is someone wanted to call the film artistic torture porn.

Seriously think about what happens in the film- is there anything other than the Solomon Northup character being abused for the better part of two hours? I don’t see it. What is the point that Steve McQueen is making beyond the obvious that slavery is bad and engenders violence and abuse? Once he’s made the point say a half an hour in, what’s left to do? What point is left to make?

I would cut McQueen some slack if he was telling a wholly historic account of what happened but he has altered Northup’s story. Allowing that we don't see any of what is happening away from Nortup, bits are altered and compressed. For example in reality Northup managed to get a letter to his family before he is shipped off. While it doesn’t change Northup’s fearing his family won’t know what happened or the abuse he suffers, it does alter the world he is operating in, everyone isn’t quite as evil as it seems otherwise. Actually I’m a bit bewildered that no one has really mentioned that other than other blacks and people in New York everyone Northup meets is pretty much shit, or if they aren’t shit and aren’t Brad Pitt bad things happen to them. (Also look at the types of language used by various groups with good people speaking almost Shakespearean English while the bad people speak colloquial language)

Was life outside of New York really this bad? Were everyone south of the Mason Dixon line shits? I think not. This is a fiction created for the film. McQueen is drawing very broad lines

I have to agree with Samuel L Jackson who commented on Twitter that he has been shocked that people aren’t upset with the use of the so called N word in 12 Years while they were upset with Tarantino’s Django Unchained. While I’m not a fan of Django I see its use of the word and violence as equally valid since both films are period pieces that shine a spotlight on the horrors of slavery. To be certain Tarantino’s film is an "entertainment" (which is why it’s derided and is knocked for using it) and 12 Years is a “serious” film (which is why has the illusion of stature and why the word can be used) but in my mind they are both equal artistically and have the same right. Ultimately Tarantino is making the same points that McQueen is but with a wish fulfillment ending (Tarantino's film should have ended really badly for Django)

I’m bewildered by many writers seeing this film as something new and unique in the examination of slavery. Many people are crowing that we’ve never looked at slavery quite like this. I’m not too sure. Sure it’s been a while but to be honest something like Goodbye Uncle Tom, an inflammatory as it is, covers much of the same ground, and it does what 12 Years fails to do, in that it connects what happened back then to what is happening today. Yes, things are better, says Goodbye, but the hatred that created slavery still exists.

The more I think about 12 Years the more it puzzles me. To me the film seems like it was made by a well-intentioned director who wanted to make a stand on a(n easy) subject and have the world applaud him. I mean you can’t say too much bad about what McQueen is doing without having someone jumping on you for being pro-slavery or a racist. In my mind this is a film where McQueen can indulge all his nasty instincts in the name of art and then win the critical establishment sing his praises for daring to deal with a dark subject. The trouble is that the film pretty much operates in a vacuum and with a stacked deck with no answers to some big questions: How does this tale of cruelty relate to today? What am I supposed to get out of it besides the feeling that slavery is bad? Or is this just an exercise in artistic cruelty? Isn't this film just a kind of bread and circuses where the art crowd can go and see some ultra-violence?

Puzzling out whether the film is just exploitation for the at house crowd has me pondering Pasolini’s Salo or the 120 Days of Sodom once more. Salo is the re-imagining of a Marquis DeSade novel in Fascist Italy’s closing days. A two hour long catalog of abuse that re-imagines the sins of the old anew has been a film I’ve wrestled with for decades (my review is here). As much as I would like to say that the film is simply nastiness for the art crowd, there is something about it that won’t let me do so. The film, for all its artistic violence is clearly about something. By resetting the film to 70 years ago the subject becomes ageless and Pasolini’s point that our leaders are out to screw and kill us may be blunt but it is to the point since in the 40 years the film was made they are still asking us to bend over for them.

I’m not sure what the connection 12 Years has to today? How is this supposed to enlighten me or make me think about anything other than slavery was bad and this man had one a terrible thing happen to him? I don’t see it any. And without a connection to today I’m forced to ponder if , after the film wins all sorts of awards the year, will we be discussing this film five years from now? Yes it will have a boat load of awards, but will it have a viewership? Will this year’s Oscars turn out to be like 1990, or many other years, where the Best Picture winner (Dances With Wolves in 1990) makes you scratch your head that a better choice didn’t win (Goodfellas)

Is 12 Years a bad movie? No, but it’s not a remarkable one. It’s a film that made it’s point early and then grew tedious since it bludgeoned us for no good reason. Yes I know it’s supposed to be good for me to witness this assault on my humanity, but at the same time without some connection to me today in this place I might as well be watching one of unending series of horror films that aren’t about scares abut simply showing people die. While admittedly the body count is lower here the level of cruelty is the same and I’m left pondering the question “you’re showing us this because…?”
Posted by Steve Kopian at December 25, 2013