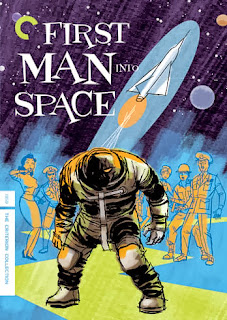 1959 movie about a test pilot who disobeys orders and ends up flying higher than he should -becoming the title in the process. He also returns to earth looking like the burnt casserole man.

Filmed in England yet set in White Sands New Mexico this is a slow but decent little scifi thriller about an experiment that goes horribly wrong. Its the sort of thing you put on late at night to fall asleep to or laugh at or drift off in the ways that black and white movies of the period are prone to make you do.

Not one of my favorites I recently picked it up as part of a Criterion box set called Madmen and Monsters of four lesser films from the late 1950's packaged together with a host of typical extras. Why Criterion would choose these films was a bit beyond me until I realized that all of the films were made by the same producers and were the follow ups to Fiend Without a Face (the crawling brain film) which Criterion put out several years ago. The transfer and such is sterling and the commentary is very informative dealing with the film and the producers life as exploitation filmmakers and to be honest listening to it boosted my appreciation of the film.

Its a good way to see the film- though to be honest I'm still not convinced the film needed a Criterion edition-especially since its pricey set (which I got greatly reduced) will limit peoples exposure to the film.
Posted by Steve Kopian at December 10, 2013