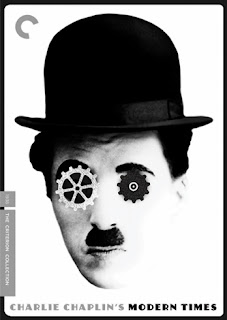 Modern Times was the first stab at a sound film from Chaplin. Yes City Lights has a score, but Modern Times has sound effects, music and a gibberish song (The Tramp speaks!) The film is also the final screen appearance of the Tramp as the tramp.

Following the tramp as he wanders through modern times, dealing with love, life and the modern assembly line this is one of Chaplin’s classic films.

Like almost all of Chaplin’s features this is a film that you’ll remember more for it’s iconic imagery than as a whole. The gibberish song, Chaplin going insane on the assembly line, the final fade out and the introduction of the song Smile are all floating around in this film. I wish I could tell you what the film is really about beyond that but I really can’t.

I remember seeing the film right after Chaplin died. This along with the Great Dictator got a double feature release to cash in. I went to see the film on a rainy Sunday at the long gone Town theater in Glen Cove. The theater was packed with a mixed age audience. After the crowd initially groaned when they realized that the film was in black and white everyone settled in for a day at the movies. The disappointment at the film not being in color gave way to roars of laughter as Chaplin went through his comedic paces. When the film ended and there was a break before The great Dictator ran the audience seemed to be up and ready for more Chaplin. The power of comedy to overcome expectations.

This is one of the great screen classics. Sure it may be like most other Chaplin films better in pieces than as a whole, but it’s still a damn funny.