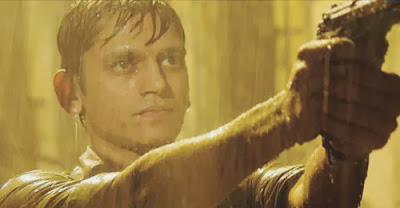 The opening night film at this years South Asian Film Festival is Monsoon Shootout. It's a film noirish look at a rookie cop who in a life or death situation plays out how his choice to shoot or not shoot will affect his life from that point forward.

A great looking film that has mood to burn is for much of it's running time a really good time at the movies. This is a down and dirty look at how the choices we make will affect our lives. While most choices will never be as life and death  or dire as the ones made here, we are always being forced to choose which way to go.

As good as much of the film is, I'm finding it hard to write about the film. While I like almost everything about the film, I found that the end of the film, particularly its final denouncement, disappointing. You'll forgive me for not saying specifically what the ending is, but I don't want to spoil it if you do see the film. Generally speaking, what happens is that after three variations of  how things might play out the film shows us what really happens. The problem is that the way they chose to end it left me deflated- we went through all of that for the ending we chose? Where I had a great deal to say while watching much of the film, by the time the credits rolled I was like, "yea...well...okay". All my words drained away.

Its not a bad film, in actuality, until we get to the very end of the film things are quite good, it's just that the last bit doesn't quite live up to what went before.

Is it worth seeing? Yes. When it works its gangbusters. Give it a try, just be forgiving of the ending.

The South Asian International Film Festival runs through Sunday the 8th. Monsoon Shootout plays tomorrow at 730 at the SVA Theater. Details can be found here.

Reviews of 7 more of the feature films will be appearing here at Unseen the day before each film appears at the festival.
Posted by Steve Kopian at December 02, 2013