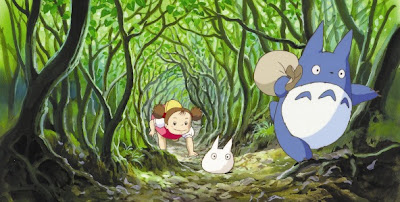 Starting Friday is a look back at the first five years of G-Kids releasing. This is a super series that any film lover must must must attended. Unless you’re a diseased film fan like me odds are you haven’t see many of these films and you should.

We at Unseen have seen all but two of the films (Eleanor’s Secret and Tales of the Night have yet to be viewed-but I am angling to see both.) We’ve reviewed everything we’ve seen except My Neighbor Totoro which I figure you’ve all seen and don’t need me to push you toward seeing it.

My two MUST SEES are Ernest and Celestine, which is the best animated film of the year, and Nocturna which is simply one of my favorite films of all time.

To help you decide how to spend your entertainment dollar here are links to all of the reviews we’ve run:

Welcome to the Space Show

Ernest & Celstine Again this is the best animated film of the year.

A Letter To Momo

Nocturna This is one of my most favorite films ever.

The Secret of Kells

Grave of the Fireflies This is one of the greatest films I've ever seen-period.

A Cat in Paris

From Up on Poppy Hill

Chico & Rita Leave the kids home for this one

Mia and The Magoo

Sita Sings the Blues (The review isn't cooperating, I'll fix and get up)

The Painting
Posted by Steve Kopian at December 18, 2013