a few quick words on THE HOBBIT: THE DESOLATION OF SMAUG (2013) 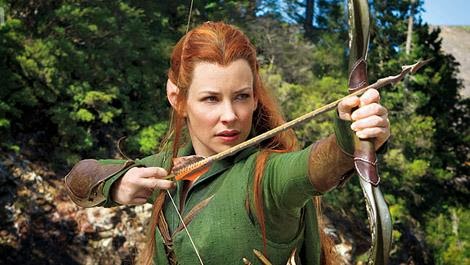 I saw The Hobbit The Desolation of Smaug this morning in a mostly empty theater. I saw the film in 2D. I didn't care that much for the first film and hadn't planned to take the day off from work to see it but my brother Joe twisted my arm so I took the day off, rounded up my brother Tom and Stewart and we headed off to see the next installment in Peter Jackson's film series.

Picking up not long after the last film ended with the dwarfs and Bilbo being pursued by orcs. Along the way they meet a skinshifter, fight spiders, meet elves, fight orcs, end up in Laketown, fight more orcs, before ending up being chased by the dragon Smaug. The film ends on a cliffhanger.

How is the film? The heated words exchanged on the post film discussions followed the following tracks:
-If you want the book as written with no additions you'll hate the film
-If you ignore the book and take it on it's own terms it's a pretty good fantasy film
-No matter how you look at it the additional material creates so way too many internal logic problems that all you can do is throw up your hands and give up.

I liked the film on it's own terms. It moves along at a good clip, has plenty of action and is pretty mindless.

Everyone else I saw the film liked it less with my brother Joe calling it one of the worst films he's ever seen- though he is a huge fan of the book. There were too many problems for everyone to enjoy the film.

For me the problems with the film come from a couple of places. First the visual effects aren't all that good. So much of the film is computer generated that like the first film there are times where it feels like a video game with actors dropped into it. You can see where real people become CGI and vice versa. Its all lovely Thomas Kinkade towns and villages but with hobbits, orcs and elves. Where the Lord of the Rings films felt lived in and real, these films feel dressed up and fake.

The other problem with the film is that the new material creates all sorts of complications with in the film, with The Lord of the Rings, and of course the books (Legolas is from a different group of elves in the books than the wood elves). You have moments that leave you scratching your head like why would something that breaths fire be afraid of fire? Where is Bilbo when the gold flows? There are more but I won't go into them since I know other people will be tearing the film apart soon.

The big addition is Evangeline Lilly's Tauriel, who is a kick ass woman of action who is a partner/love interest with Legolas. I have no problem with her. I like her woman of action character, but I have to wonder what the hell she's doing in this film. Her arc upsets the course of the story and makes you wonder if Tolkien's name should simply be removed from the film.

As for the plot the film is largely a series of battles with the orcs, spiders, villagers, elves and a dragon. While there is some exposition the film is largely just an unending series of action set pieces- which is good because it keeps things moving, but is kind of bad since you realize that had they pared it all down and trimmed the new stuff you'd have an hour long movie.

Don't get me wrong I like the film, but the sense of wonder the original trilogy spawned is gone as Peter Jackson is back in his King Kong mode and over doing everything. More is not better, its just more.

The weird thing about the film where after the first film I couldn't have cared less about this film, this time out I'm looking forward to the next one- partly because the film hooked me, but largely Jackson ends on a cliffhanger with the action broken at a moment of great peril.

Should you go see it?

Unless you are huge fan of the book and hated the first film for the changes made, I'd say give this one a try. is it great? No but it is passable entertainment. I will add that there is zero reason to see this in 3D. There is nothing that I could see that would have looked any better in 3D. Save your money and go 2D
Posted by Steve Kopian at December 13, 2013