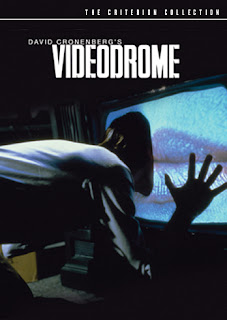 I was a fan of David Cronenberg’s before Videodrome, but there was something about the film that really made me love him even more.

Perhaps it was the fact the film messed me up so bad I drove off the road on the way home from the theater or perhaps it’s that the film has been the source of literally days of discussion about the nature of reality and filmmaking, but whatever it was after seeing this film I was a hopelessly in love with Cronenberg.

The film was the beginning of Cronenberg’s move to Hollywood. After this would come the big budget Dead Zone, The Fly, Dead Ringers and everything else that followed.

The film follows James Woods who plays the operator of a small pay TV station specializing in softcore porn. One day his tech guy stumbles on a pirate broadcast of something called Videodrome. It’s an S&M related program that has a certain something about it. Woods is fascinated and he begins to watch the show. Unfortunately as a result he begins to change physically, two of the changes are the infamous slot in his stomach into which tapes of his instructions are inserted and his hand morphs into a gun. The question becomes is any of this real or is it all in Woods head?

The Cronenberg theme of a body in revolt is on full display here. Of course the reasons for it are less clear than in any other of the directors films. I say this because part of the plot has to do with the reasons behind Videodrome.

I’m entranced by the film and severely messed up. Every time I revisit the film I find that how I see the world, how I see TV, changes. It maybe cliché to talk about how the film is a sly commentary on the state of TV and its viewers but at the same time its an accurate description, What Cronenberg was talking about how we are what we watch is even more true today than it was then thanks to the Internet which allows people truly to immerse themselves into their obsessions.

This is one of the great films of the 80’s. Its one of the best films that Croneberg has made.