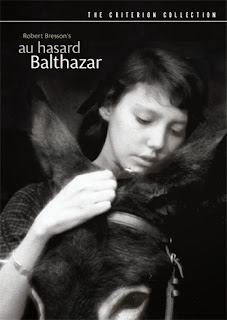 How you react to this film will depend upon how you react to Robert Bresson’s lyric realism. Many people I know dislike this film a great deal, others, including my good friend Mike, think it’s a transcendent film. I’m somewhere in the middle. Actually given my druthers I probably would never see it again.

The film is the parallel story of the life of a young girl and a donkey. Both suffer the slings and arrows of life. Focusing largely on what happens to the donkey and a round it the film is a little slice of sadness.

For me the sadness overwhelms everything and I’m forced to question why we are seeing this. Why show us the suffering? I know that there is pain and suffering in life but why must we dwell on it as it is here?

I know most of the people who truly love the film tend to be devoutly religious. To them the film is a mediation on the suffering of Jesus or any religious figure. Within the film they see a perfect representation of the path through hell into paradise. I have spoken with several seeming unemotional people who have been reduced to utter mush by the film’s ending.

Its that that makes me want to write up the film. Sure I’m not a fan of it, but you might be, and the chance that you like it is enough.
Posted by Steve Kopian at December 29, 2013