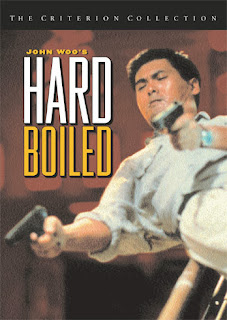 I’ve heard that Hard Boiled was to be the farewell for John Woo to big Hong Kong action. Considering some of the similar films he’s turned out in the years since I think the goodbye was premature. Woo’s film wasn’t a final statement, merely amping up of the insanity.

The plot of the film is a typical cops vs robbers story about gun running. The details of it all are largely forgettable, and completely illogical, the film makes almost no sense what so ever. It simply exists in order to set up the action sequences.

And the action is all that matters. The seemingly never ending shoot out in the hospital where the bad guys are keeping the guns is one of the truly great set pieces in film history. And considering it was all done without the aid of computers it’s even more amazing-even by Hong Kong Cinema standards.

Of course the film contains one of the most iconic images in Hong Kong cinema, Chow Yun Fat with a gun in one hand and a baby in the other. The image is not a come on, Chow does spend a chunk of the climax with a baby in his arms. It’s a sequence that would never made it out of any American studio for any number of reasons, but in Hong Kong it’s perfectly acceptable. Actually it might have ended up in a Hollywood film, but the edge would have been off it, odds are there would have been no real danger for the baby, however in Woo’s film anything is possible, I had one friend waiting for the baby to pull a gun and join the fight.

I’m not going to try and sell you on the deeper meaning of the film. I know some people have argued that the film is a reaction to the then impending handover of Hong Kong to China where the baby represents the people, the bad guys are the Communists and the cops are the Hong Kong authorities. Any thought of deeper meaning is hogwash and the work of a person with too much time on their hands. Don’t kid yourself, this is just a balls to the wall action movie. If you love action films you absolutely must see this film.

The film was released as one of the first Criterion titles ever put on DVD (in a scaled down version from the laserdisc release) however edition has since gone out of print. The film is available in a super packed edition DVD from another source and is absolutely worth picking up.