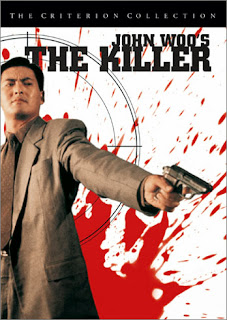 John Woo’sThe Killer was a game changer. This was the film that made much of the world sit up and notice the high octane action that was coming out of Hong Kong. It was pretty much the moment that I was dropped into the world of Asian film with no way ever to come home again .

The story of my discovery of Hong Kong action and of John Woo came on a fateful day in Hempstead long Island. I was at a nostalgia convention at the Holiday Inn. We were wandering around the tables of toys and goodies when I came upon a guy selling all sorts of VHS tapes of stuff. He had the infamous work print of Silence of the Lambs (which I foolishly loaned out never to get back), tapes of toy commercials and assorted other things. He also had this film called The Killer. He said I had to see The Killer.

"It’s about an assassin who blinds a girl and then plays a cat and mouse game with a cop. Its unlike anything you’ve seen before."

"The shoot outs they are these ballet of bullets. Guns fire and fire. It’s beautiful and some sort of new way of shooting action".

"No seriously. He popped a cassette out of a case and put it in the VCR. Watch the opening."

The opening sequence where the girls is blinded and the course of lives were set played out. When it was done I was han ding over my 15 bucks to get the tape.

When this and Woo’s HARD BOILED were released on laser disc I lusted after them. Not only did the film finally get a US release, it was loaded with extras, commentaries and other fun things (trailers for all of John Woo’s films) It was way too expensive for my wallet and I took to renting the discs and putting them on VHS. Eventually I picked up the film on DVD though long after the Criterion discs went out of print.

Actually you should see the film if you just want to see a good film. It’s a classic.

(Out of print from Criterion the film is available from other outlets on DVD)
Posted by Steve Kopian at December 07, 2013