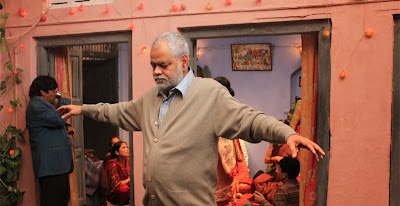 We believed it all with our eyes wide shut

When his daughter falls for a boy no one likes a man realizes, after meeting him, that perhaps he isn't as bad as he had been told. He then realizes that he can not trust what people tell him only what he experiences. This sets him off to see and experience everything anew. The trouble is that insisting on accepting only what he knows to be true causes all sorts of problems in his life... as well as bringing great joy.

The promotional material for Ankhon Dekhi at the South Asian International Film Festival makes comparisons to King Lear. I'm not really sure why this is since other than being about a father with a daughter who maybe mad there is no real comparison. Lear is a dark examination of madness and destruction. Ankon Dekhi is something else entirely

I think the best way to describe the film is as the story of one  man's quest to experience life. Along the way he becomes a kind of guru/shaman/madman who questions all of the whys and hows of existence. Its a film full of ups and downs and just a touch of magic.

I don't want to make the film sound heady or overly deep and philosophical, it's not. While there is much pondering the nature of existence the film is ultimately just interested in all of the characters, the lovers, who set things in motion, the relationship between Bauji and his wife and the one with his brother. This isn't about the ideas as such it's about the good people we meet. these are great people and there is wonderful pleasure one gets just being around them.

And yes discussions are enlightening. This is practical philosophy of the common man. There is something there that is much more profound than well educated discussions.

Looking back over what I've written I see that what I'm saying about the film isn't entirely ---clear. Partof this is my own fault, but part of it is the films fault.  I'm not blaming the film in any bad way, only that seeing it was such an unexpected delight and joy that it confounded my expectations. Its the sort of film where I can tell you everything about it, but at the same time I'm not really able to tell you what it's like to see it or experience it.

Somehow that's apropos since the film is very much concerned about getting a person to experience life for themselves. I think somehow this is a film you need to experience for yourself. Actually this is the sort of film I'm going to need to experience several more times because quite frankly it's really cool.

Count this as one of my treasured finds of the year.

The film plays tomorrow at the SVA theater and is very much worth going to see it. Hell it's the world premiere and this is one of those films you're going to want to be in on on the ground floor. Go see it.