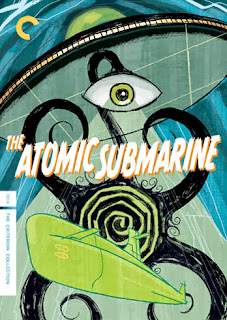 On the face of it the inclusion of Atomic Submarine as a Criterion title but since its inclusion comes as part of a four film set of films called Monsters and Madmen it’s perfectly understandable. I’ll be reviewing all four films in the set (Haunted Strangler, Corridors of Blood, First Man in Space are the other titles) over the course of this December assault on Criterion films. The set highlights some small studio gems that were released during the height of the late 1950’s horror/scifi craze.

The plot of the film is pure 1950’s scifi schlock. I say that with great affection. The film follows the crew of the title ship as it goes in search of what is causing ships to disappear in the Artic sea. What transpires is that there is an alien spaceship lurking under the sea and its planning on taking over the world.

High art be damned when you can have a giant one eyed alien trying to take over the world. I mean really, which would you rather have transforming cars from space loudly destroying the world or a bunch of B level Hollywood stalwarts taking on a cheezy special effect? Give me the cheese.

Its very hard to really write up a film like this. One can’t be over analytical since to do so would only result in the film falling part. I know the fact that I don’t go for deep discussions of many films has made some reviewers and organizations look down on me and Unseen. We are not what they see as film criticism. Yes occasionally I’ll take a film apart, but at the same time I’m just trying to tell you about films you’ll want to put on and curl up on the couch with. Atomic Submarine is a film to curl up on the couch with- especially when you can play the other films in the criterion set which makes for one hell of an all night drive in.
Posted by Steve Kopian at December 06, 2013