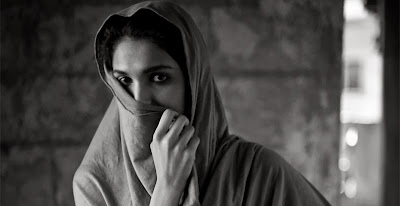 I'm going to be completely honest and up front with my feelings for this film and say that despite my best efforts this film never really connected with me  I tried I really did but despite two passes through the film any connection remained just out of reach.

The film tells the story of a marriageable young woman named Rafina who is trying to find her way in the world. She is living with her mother and trying to figure out what to do. She is having a chaste relationship with a young man down the hall who has traditional values and would rather not have Rafina out and about except with him. When Rafina convinces her mother to let her get a job at an advertising agency, but what was supposed to be simply serving tea, turns into a modeling job with her face plastered across billboards. What will be her course.

The problem for me is that I never related to the film. Part of it is I am the wrong sex  to connect with the struggles of young woman living half a world away. A larger part of it is that the script walks a fine line between being a real life story and a polemic angling for change in the Muslim world. Its a bit too much a plea for women's rights.

This isn't to say that the film is bad, it's not. The film has some great performances that come together to create some great characters and moments. As I said above I saw the film twice and if I didn't like the film I never would have done that. The problem is that the great moments, and the film is full of them, get lost lost behind the plea to allow women to be modern. The film is worth seeing when it plays at NYIT Auditorium as part of the South Asian International Film Festival, I'm just not sure if you'll love it or be like me and just like it.
Posted by Steve Kopian at December 05, 2013