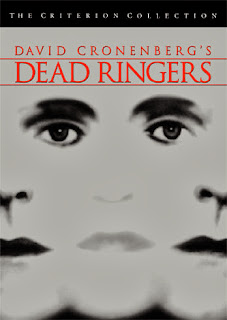 Jeremy Irons should have won the Oscar for his performances in Dead Ringers. Irons subtle performance is one of those great performances that becomes more incredible the more you see it. It’s one of those that makes you realize in retrospect just how wrong the Oscars got it. (Dustin Hoffman won for Rainman). It’s also one of those performances that literally makes your skin feel like its crawling all over your body. Talking about bodies in revolt, when I saw this film it felt like by skin was trying to leave the theater of its own accord.

The film is the story of twin gynecologists who over the course of the film go off the deep end and into total madness. The films are so much of one mind, almost two sides of the same person, that they share everything, even lovers who can’t tell them apart. As the madness deepens things go black and the film almost becomes similar to being locked inside a diseased mind.

It’s a masterpiece of cinema and one I rarely revisit because it upsets me so much.

I remember reading some of the reviews for the film which stated that the film seemed fantastic to them and something that couldn't happen, except that the film is based on a true story. To these reviewers the story having a basis in fact was what made it creepy. For me the fact that it was a good film made it creepy. I say this because if you compare the real story and what happens in Cronenberg’s film there isn’t a great deal that’s the same.

What gets me is that the film puts us into this off kilter head space. It’s not a head space that is vastly removed from our own sense of reality, rather it’s just off enough as to seem wrong. Within the context of the film the weird gynecological tools that one of the brothers comes up with kind of makes sense, and that’s what’s troubling, this kind of could happen to us.

One of the best film David Cronenberg has turned out. Its wonderfully subversive I that it’s very much like his early body horror films, but gussied up and released by a major studio, which gave it just enough credibility that people who never would watch Shivers or Rabid went and had their minds screwed over.

If you want your mind bent see this film.
Posted by Steve Kopian at December 15, 2013