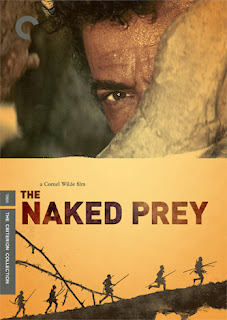 Cornel Wilde's Naked Prey is an atypical action film. Sure it has plenty of action but it isn’t big and splashy action but small scale and realistic. There is also almost no dialog in the film.

Based on an actual incident in the Nebraska territory about 1806 when a trapper was captured by the Blackfoot Indians the film follows an expedition of hunters who anger a tribe of African bushmen by refusing to pay to hunt on their land. Captured by the warriors the group is subjected to various nasty deaths. Wilde playing the one white man with a clue, is stripped naked and told to run. When he reaches an arrow shot into the distance they warriors will hunt him. Wilde is much faster than his pursuers expect and when one of the tribesman makes the mistake of throwing a spear at Wilde and missing, he unwittingly arms his prey and gives Wilde a fighting chance.

One of the truly great adventure films (which you probably never heard of), The Naked Prey feels real. Even if you didn’t know that the film is based on an actual incident it feels like something that could happen. Give the credit to director and star Cornell Wilde who keeps it all grounded. There are no fantastic twists. Sure there are a couple of fortuitous strokes of luck but they are not outside of the realm of possibility.

I love that there is no voice over or no unnecessary dialog. Wilde’s pursuers speak to each other in their language but its not subtitled since we know what they are saying even if we don’t know the words.

The score of the film is one of the truly great wonders of cinema. Consisting of tribal instruments with a heavy dose of percussion the film is driven forward and give pacing by the constant drumming that acts as if they are the foot falls of the men chasing our hero. It doesn’t seem like much and it almost seems too obvious to work, but at the same time it ratchets up the tension in a way that few similar films ever manage.

God bless Criterion for putting this out on DVD. Not only is this a great film that now can be noted by people who never would have looked at it had it not been picked by Criterion, but it also makes sure we get to see the film in the glorious widescreen that keeps the image full so that we realize just how alone our hero is.