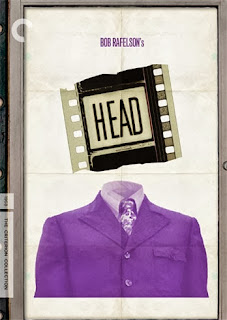 If you want to know why my sense of reality is bent the way it is consider that I was in diapers and watching the Monkees when the TV show was first on. Is it any wonder that I am as off center as I am?

When the series was done series creator Bob Rafelson decided that in order to complete the Monkees assault on popular culture they should make a movie. Of course it being the 60’s, involving the Monkees and being written by Rafelson and Jack Nicholson it wasn’t a typical movie.

A bomb when it was released (it wasn’t released it escaped in a badly planned release strategy that barely let anyone know it was coming and didn’t tell anyone what it was or who was in it) the film has since gained a genuine cult following even as it has split die hard Monkees fans.

The film is a stream of consciousness exercise with the group going through various twists and turns in and around a movie studio as well as through life. A send up of popular culture the film is also a commentary on TV, war, the nature of celebrity, good reputations, bad reputation, music and any number of other things. Rafelson has said that he tried to squeeze as much into the film because he wasn’t sure he would ever get to direct a film again. I’ve spent 40 years trying to make sense of the film and its plot and it’s failed me at every turn so all I’ll say is stuff happens.

I have never gotten the film. I never liked the film and after several attempts at watching the film over the years I found I pretty much avoided the film like the plague…and then I got the BBS box set from Criterion and I started to go through all of the films. Figuring that I might as well try the film once more, hell I had the film whether I wanted it or not, I put it on one afternoon.

Surprisingly after about five minutes the film clicked and for the first time I got the film. I understood what it was doing and I found it’s a great film. Decidedly Avant garde and experimental, it’s a film that you have to go with. Each bit is kind of stand-alone and kind of relates to other things. Bits circle back on themselves (the bathroom, the desert, the coke machine). Its operating on a much higher level than you expect with the dismantling of the TV show song leading into the assassination of Nguyễn Văn Lém by General Loan juxtaposed with a crying fan being shocking despite the fact that shooting has been wildly over used.

I can’t say enough good about the film.

You’ll forgive me for not going into greater discussion but I’m still trying to process what I think and feel of the film. It’s an honest emotion considering that I’ve fought with the film for 40 years only to suddenly have this grand AH HA moment and understand why something is considered to be so great and so important.

What I want to do is say that if you don’t like the film, what you should do is get your hands on the BBS set edition and read the book that comes with the film and watch Bob Rafelson’s half hour interview and then see the film again. I think you’ll get it. I know I always say movies shouldn’’t be explained- and while I still believe that I also think I always got it, but I never really undertood the context. I never understood the references. I think I had to be as old as I was so I could put it all together.