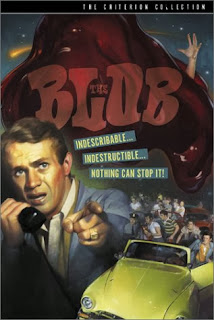 Okay for those who don’t know The Blob is about what happens when a meteor falls to earth. When the meteor is poked with a stick , a jelly like being crawls out of the rock and attaches it to the man poking it. The blob then begins devouring him, and anyone who gets in the way. Almost 30 year old Steve McQueen plays a local “kid” who’s always in trouble with the law, but who is still liked. He keeps running into the mess the blob leaves behind but no one will believe him or his friends. By the time that anyone believes him the blob has grown to monstrous proportions.

It was Steve McQueen’s second or third credited big screen role. Prior to this film he had small un-credited roles in films and a growing body of TV work but after The Blob McQueen’s career was set and movie history was made. With this small scale little horror film a movie icon was created.

You don’t believe me?

Think about how the film would play if McQueen wasn’t in it. It wouldn’t work, or not work as well. McQueen instantly adds a seriousness to the proceedings that would never have been in the film otherwise. He plays it straight and the film is scary as a result.

Its scared the crap out of many kids I know. Sure the effects aren’t the best, but there is something about the slow moving herky jerky motion that works on the visceral level. It scared one guy I know so bad that he refused to make his first confession because he was told that the blob lived in the confessional. And it’s still scary even now. I dare you not to feel something when the blob first attaches itself to a victim. It’s played straight and it leaves you feeling uneasy.

If you want to know how important playing it seriously is, consider that the sequel Son of the Blob (or Return of the Blob) was written as a serious film and turned into a comedy by director Larry Hagman and the cast. The result is a film that only works and fits and starts. Its most memorable ones are the serious ones, such as Godfrey Cambridge engulfed by the blob while sitting on his recliner.

Actually you should just forget the sequel and see the original, which is out on DVD and Bluray from Criterion with lots of bells and whistles.

See it and never look at your peanut butter and jelly sandwich the same way again.
Posted by Steve Kopian at December 11, 2013