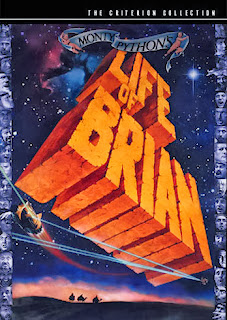 I’m not a huge fan of The Life of Brian.

No wait, let me restate that.

I’m not a fan of the Life of Brian in the form it exists. I made the mistake of reading the script before I saw the film so I had all of the cut material in my head when I saw the film. The trimmed material, was for me, some of the funniest stuff the Pythons ever did (Otto’s suicide squad for example). When I finally say the film I couldn’t understand where all of the great stuff went. I also wondered when I’d ever get to see it.

For those who don’t know, the Life of Brian is the story of Brian , a young man in Judea at exactly the same time as Jesus. His life mirrors Jesus’s however to much more comedic and satiric effect.

The film was picketed and protested to such a degree that the little film that probably would have come and gone without making much of a blip on the radar became a box office smash and cemented the Python’s reputation as satirists of the highest order for all time.

For me the really interesting bits of the film are its making, Kim “Howard” Johnson, a fan who became a friend and biographer of the Pythons wrote a great book about the making of the film. There is a very good hour long documentary on the making of the film (The Pythons) which is on the Criterion DVD and there is various interviews concerning the film which are just fun to read.

Actually the reason I’m writing the film up is because if you are a Python fan and if you like the movie, you need to get the Criterion disc because the film has two commentary tracks with the surviving pythons. The commentary has each of the pythons talking about the film and other things and while some of the stories overlap there is enough variation that you see things slightly differently during each pass through. They are amazing and the commentaries are so good that I have been known on more than one occasion to listen to them in succession. The commentaries are so good that friends of mine had me put the commentaries onto VHS tapes for them because they didn’t have DVD players at the time.

Yes you want to buy the disc, of if not buy it rent it.