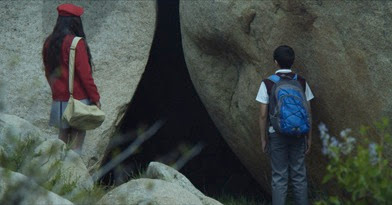 I am at a loss to explain much of anything connected to Here Comes the Devil. Much of the film doesn’t make sense. The film has a weird moment early on that kind of shows that things were not right to start with which under cuts what follows. There are huge gaps in logic and reason. Mostly it’s the sort of thing that makes you wonder why this was bouncing around the festival circuit for the last year before getting a big roll out.

The story involves a family which goes to on an outing. While the parents wait in their car the kids go off to explore a large rocky hill. When the kids fail to come back the father goes to find them but can't find them. By the time the police arrive its too late and too dark to search. However in the morning the kids are back and all is right with the world. Except it’s not. There is something wrong with the kids, or so it seems and as the parents look into things it transpires that the hill is shunned by the locals because that’s where spirits take over people and use their bodies as shells to inhabit.

That sounds scary and disturbing, and it is occasionally. There is one of the nastiest murders I’ve seen on screen, behavior is frequently wrong and the soundtrack is full of discordant sounds and aural triggers that set us on edge (like Gaspar Noe did in Irreversible). But at the same time the film doesn’t make sense even internally, characters do stupid things (a police officer trying to get into a house is oblivious that the person he is waiting for has just driven up next to him) and the film signals that all is wrong with the kids before anything happens by having them walk up the hill hand in hand like lovers thus killing any later shock that the “demon” children are getting it on.

Mostly the film is very silly for all of the wrong reasons. There is cheapness to much of the film that harkens back to the horror films of the late 70’s and early 80’s independent horror films. It’s the same locations, it’s the same shots. Many events are talked about but not shown. We get lots of close ups of the distraught parents contemplating the terrible situation they now find themselves in. And we get weird turns of plot that make no sense- for example the parents leave their kids with a family friend while they go out one night. When they return the friend is gone, a pair of shredded panties is on the couch and the kids are asleep. They are bothered by it but just let it go despite a call to their friend not being answered. There’s more that doesn’t make sense, and as the film goes on revealing more and more the film’s internal structure completely falls apart as things are revealed to make even less sense.

The film does get a few things right. The sex and implications of sex are very steamy. The lesbian sex scene that opens the film is hotter than those in Blue is the Warmest Color. The murder and it’s fall out are very well done. Some of the unease that the film generates in fits and starts is pretty cool. Largely though the film misses more than hits. I was laughing out loud through much of the film.

Speaking of sex, I do have to say that the film is one of the most anti-sex films I’ve seen in years. All of the nattiness happens around some sort of sex or implication of sex, the film begins with two women having sex; the trouble all begins when the parents have sex instead of going with their kids; The dark cave on the hill resembles a vagina; there is a question of menstruation; and we learn that there was incest even before the film starts. Clearly sex brings doom and violence.

Walking out of the film a couple walking behind myself and Peter Gutierrez commented that the film was the worst film she had ever seen. Peter told her that if this was the worst film she ever seen she was very lucky. She was taken aback at the thought there were worse films than this. Both Peter and I assured her there were. Certainly while the film isn’t good, it isn’t the worst. Rather it’s a film to watch with drunk friends and make fun of. I can’t imagine actually watching this and getting scared, then again I’m still shocked that that this film is getting a theatrical release, so I’m guessing someone likes the film, though I can’t imagine who that might be
Posted by Steve Kopian at December 12, 2013