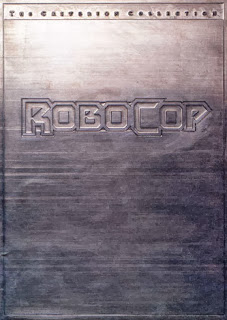 Back in the laser disc days the Criterion edition of Robocop was a must have. Priced way above my ability to purchase it, it was one of those discs that ended up getting rented frequently so that I and my friends could sit and watch all of the deleted scenes and watch the uncut directors version with his commentary track. I know I also ended up making a VHS copy for Ken so he could re-watch it as his leisure.

When the film hit DVD the choice between the regular DVD or the Criterion one was a no brainer, you had to get the Criterion one. While the Criterion DVD has gone out of print and most of the extras have ported over to other editions, the Criterion disc remains one of my treasure. I suspect less for the film, but more for the good times had watching it with Ken, Randi and others.

The film is a bloody cartoon about a cop effectively killed in the line of duty but brought back as a cyborg lawman. It’s a wicked satire of modern life and corporate society that’s grafted on to a damn good crime story.

That the film works as well as it does is clearly the result of it being directed by Paul Verhoven who knew how to tweak things so it played on more than just one level. If you want proof simply look at Robocop 2 which was written by the same people (including comic god Frank Miller). The second film while a great deal of shoot ‘em up fun is nowhere near as deep and meaningful as this film with the result it fades from your brain as soon as its over.

Robocop is a classic of modern cinema (one need only look to see at how the film influenced all that followed to see that) and any film lover worth his salt should see it.
Posted by Steve Kopian at December 03, 2013