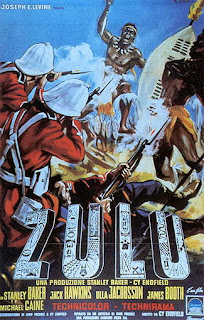 Zulu tells the story of the defense of Roark’s Drift by a small band of British soldiers who were attacked by a band of Zulu warriors. After a simple set up of the Zulus going on the war path after a victory a short time before (The events are depicted in Zulu Dawn a prequel that was made 15 years later) the film settles into life in the outpost before the attack…and then carries over into the attack

This is the true story of a brave stand that effectively ended the Zulu wars. It's a story of heroism and beating back impossible odds to survive something that should have killed everyone involved. Actually the most amazing thing is that almost none of the defenders were killed. Knowing that doesn’t distract from the tension since unless you are a student of the battle you won’t know what happens at each twist.

The power of the film is its simplicity. Focusing just on the battle and nothing else the film gives us enough time to get to know the characters and become invested in the landscape of the battlefield that we understand just how hopeless the situation seems. Things are not complicated with additional whys and wherefores, we just have this one tale of survival and we are so much better for it.

The first time I really saw the film was when I rented th Criterion laser disc some 20 years ago. Sick in bed I camped out on a cot in the living room and watched laser discs all day and night. I remember watching the film with the surround sound system cranked. What was weird was the cheap as system I had never really worked that well except for Zulu. When the Zulus surrounded the station and chanted I felt like they were surrounding me in the living room.

One of the truly great adventure films ever made. It’s sad that the film has fallen into disfavor (despite it having Michael Caine’s debut). I’m guessing the fact it’s now to befound in the bargain bin that has turned people to it.. Don’t be a fool. If you’ve never seen it get yourself a copy. Sure the Criterion laser is long out of print but there are other editions out there so there is no excuse
Posted by Steve Kopian at December 05, 2013